With the Fed sounding more dovish, the bond market is adjusting and now signaling that rates for mortgages and other consumer loans could be lower in the near future than what was expected just a few days ago.

Federal Reserve Chairman Jerome Powell on Wednesday soothed some market concerns that the central bank would march ahead with more rate hikes than investors were expecting. Powell’s comment that the Fed was close to neutral sent bond yields lower, as the futures market began pricing in just one rate hike for next year, in addition to the quarter-point rate hike expected at the Fed’s December meeting.

The 10-year Treasury yield briefly dipped below 3 percent overnight for the first time since Sept. 18. The 3-percent level is a psychological milestone that the 10-year has spent much more time below than above since the financial crisis. The move higher in September was seen as an important step into a new range, in reaction to Fed tightening.

The 10-year is the benchmark rate that is used as a guide for pricing some business loans and consumer loans, including mortgages. As the 10-year yield rose this fall, mortgage rates also went higher, edging above 5 percent for a 30-year fixed rate and holding just below that level for weeks. The higher rates have been blamed for a dampening activity in the housing market.

“To what ever extent we see Treasury yields decline, mortgages will follow,” said Matthew Graham, CEO of MBS Live. “The longer it lasts and the bigger it is, the more certain the reaction in mortgages will be.”

Graham said he is waiting to see the Fed’s forecast on interest rates that will be released in its so-called dot plot chart at the end of its meeting on Dec. 19, to see if mortgage rates could really fall and whether they’ve seen the highs of the cycle. “If we see a shift in the dots, that’s really game on,” Graham said.

But in the Treasury market, there remains hot debate over what Powell exactly meant and whether the 3 percent level is one where the 10-year will sit or whether it will be tugged higher by any number of factors.

“I think we’ll spend more time above 3 percent than below,” said Peter Boockvar, chief investment officer at Bleakley Advisory Group. “We’ll have to see what happens. What if oil rallies back to $60 or $70? If the Fed is worried about growth and not worried about sticky inflation, they could stop tightening before they should, and the bond market does it for them. There are so many unknowns. It’s really tricky.”

Trade has become an unknown for Treasurys, with a focus on a meeting between President Donald Trump and China’s President Xi Jinping this weekend at the G-20 summit. If news on trade and tariffs is viewed as negative for the economy, yields could move lower. But if tariffs start to drive up inflation, yields could move higher.

The growing federal deficit is another concern, and it means more Treasury supply, another reason rates could rise. 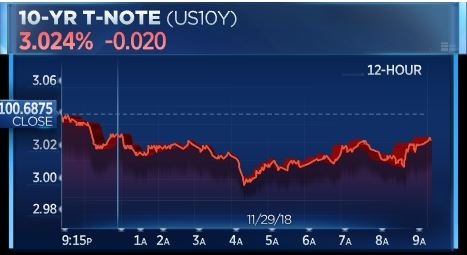 “The Fed would love to get the [fed funds] rate to 3.5 but given the wobble in risk assets and economic headwinds, there might be a point where the Fed pauses,” said Ian Lyngen, head of U.S. rate strategy at BMO.

The Fed funds rate range is currently 2 percent to 2.25 percent, and neutral is considered somewhere between 2.5 percent and 3.5 percent. Neutral is where the Fed benchmark rate is no longer stimulating the economy, but it is also not slowing it.

Powell’s comments Wednesday were taken as a reversal of his comment Oct. 3 that the Fed was “a long way” from neutral. That initial remark shook markets and created a shift toward higher rates.

“I think we consolidate around 3 percent. We drift a little bit lower, then the Fed comes out and tries to reassure the market it’s still hiking, and when they do, we see more upward pressure on rates and a much flatter curve,” said Lyngen. That expected Fed comment could put more upward pressure on 2-year rates, which most reflect Fed policy, and it could rise closer to the 10-year yield, in a “flattening” move.

“Given the wobble in risk assets and economic headwinds, there might be a point where the Fed pauses,” said Lyngen. “It’s the question of whether it is going to be the pause that refreshes or the end of the cycle..The fact oil dipped below $50 and we’re seeing drops in real GDP in Germany, Sweden and Switzerland, I think is very concerning. We are late in a cycle that tax reforms were only temporarily able to help.”

Strategists said the 10-year yield could also be held down by what’s happening in Europe, as U.S. yields are closely tied to German bund rates. But on the other hand, the European Central Bank is expected to stop easing, and rates there could move higher.

“I think a lot depends on growth and on inflationary factors,” said Lyngen.

But some strategists say Powell didn’t really change his tune much, and some firms, like J. P. Morgan and Goldman Sachs continue to see four rate hikes for next year.

“I think people are taking Powell too literally,” said Michael Schumacher, director of rate strategy at Wells Fargo. “You think about the way he speaks…he mentioned the idea of being pretty close to the range from what people perceive neutral to be. It’s a pretty wide range, and people are hung up on it and say the bottom of the range is 2.50, we’re almost done. I think the broader range is higher and I don’t think Powell has changed his view in the last 45 days.”

But Caron said it was a clear change in course.

“I see it the as the so called Fed Put has been restruck at a lower level. Clearly there is debate as to what Powell said and what he meant to say and how the market is either right or wrong in interpreting his comments,” Caron wrote in an email. He said the neutral rate was perceived to be closer to 3.5 percent after Powell’s original comment in early October.