Wall Street is loading up on boring stocks as year-end approaches, a trend that could signal investors are worried the recent market volatility could continue.

Net inflows into exchange-traded funds that track high-dividend, low volatility stocks are above $500 million on an eight-week rolling basis — the first time since 2016 — according to data from Jefferies. High dividend yields and low volatility are key characteristics of stocks in the consumer staples and utilities sectors. Because of their characteristics, these stocks are considered less risky than others.

Staples and utilities have recently outperformed the broader market. The Consumer Staples Select Sector SPDR ETF (XLP) and the Utilities Select Sector SPDR ETF (XLU) are up 5.8 percent and 4.1 percent, respectively, since Oct. 1. The staples ETF was also on pace to post its longest monthly winning streak since 2006. The S&P 500, meanwhile, has lost more than 5 percent of its value in that time.

“This is yet another indication of high risk aversion,” Thomas Thornton, head of U.S. product management at Jefferies, wrote in a note to clients. “Other signs of high risk aversion and poor sentiment are evident by looking at Oct/Nov price action in any broad equity index.”

The broad equity market has been under pressure recently as investors grapple with worries of rising rates as well as fears of a U.S.-China trade war slowing down the global economy. The S&P 500 briefly fell into a correction, dropping more than 10 percent from its all-time high set in September.

Shares of staples like Clorox, Mondelez International and Procter & Gamble are all up more than 5 percent this month. Meanwhile, shares of Facebook, Apple, and Netflix are all down sharply this month. The tech stocks are part of the popular “FAANG” trade, which has been responsible for the lion’s share of the market’s gains in recent years. 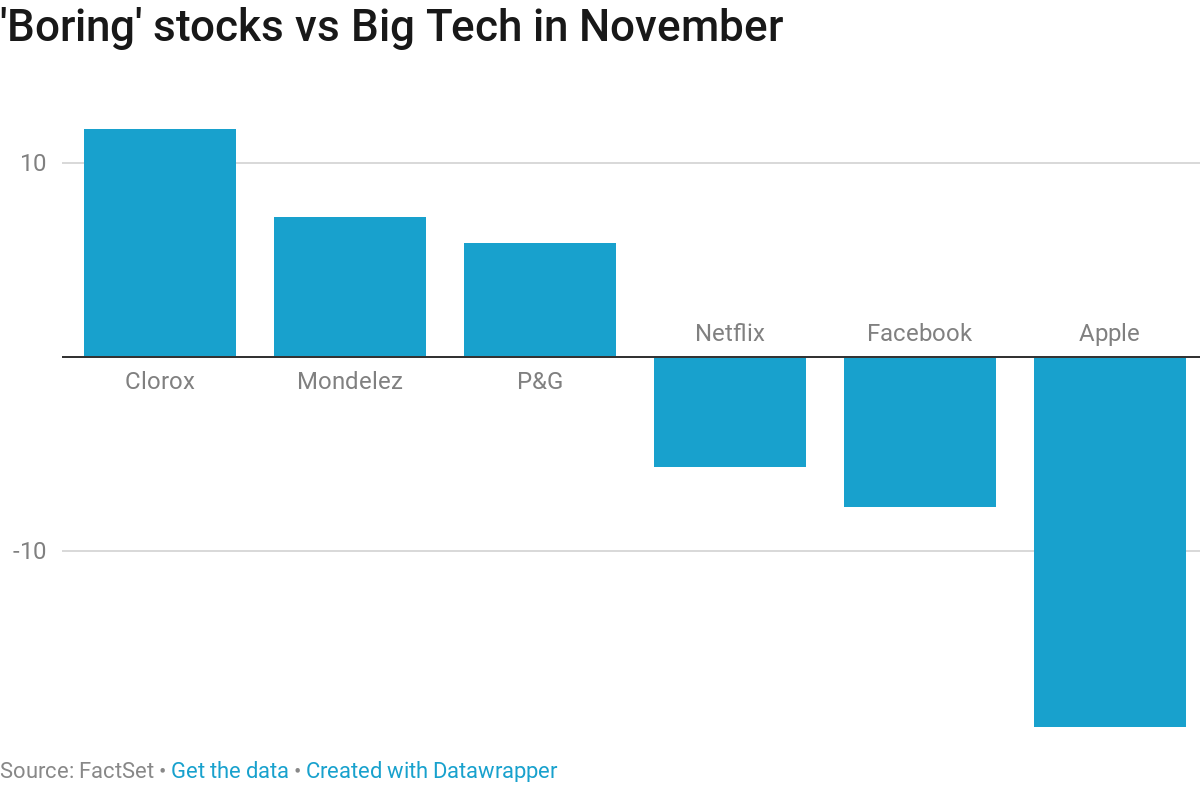 “It’s a sign investors are getting more defensive, but it would have made more sense to get into these names in the summer when they were beaten down,” said Andrew Slimmon, managing director at Morgan Stanley investment Management.

The broader market cut some of its steep losses this week, with the S&P 500 rallying 4 percent in its best weekly performance since March. But the fact that investors are still adding onto their defensive positions hints that Wall Street still fears stocks could retest the lows seen in the correction.

To be sure, stocks are entering a time of the year that is typically strong for them. According to data from The “Stock Trader’s Almanac,” the S&P 500 averages a gain of 1.6 percent in December. LPL Financial’s Detrick also points out that December has never been the worst month of the year for the S&P 500.

“It’s the feel-good time of the year,” Detrick said. “There isn’t that much big news in December and there isn’t a lot of trading. We wouldn’t be surprised if we see a rally into year-end.”

A correction could be coming. How to protect your retirement portfolio
Now is the golden age for Southeast Asia start-ups, says GoTo founder
Travelers care but few want to pay for it
This tax brings in billions worldwide. Why there’s no VAT in the U.S.
Matthew McConaughey explains how time off helped relaunch his career